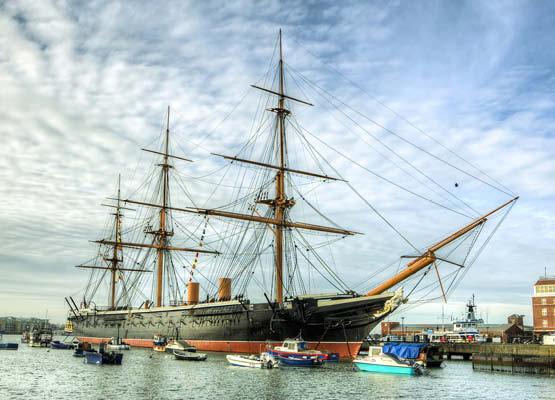 Unearth fascinating naval history at one of only three of Her Majesty’s British Royal Navy operating bases in the United Kingdom. With 12 on-site and 2 off-site attractions, it’s no wonder thousands of visitors flock to the dockyard.

Visit the popular HMS Victory, built in 1759 and which served as Vice-Admiral Lord Nelson’s flagship at the Battle of Trafalgar. Visitors can now experience the hand-held audio guide that really brings the Battle of Trafalgar to life and allows you to feel fully immersed with the ship's history during its 206 years of service.

Another popular on-site attraction is 36 Hours: Jutland 1916, The Battle That Won The War exhibition, which details the Battle of Jutland, one of the most important naval conflicts of WW1. You can see diary entries and letters from some of the 100,000 men that fought in WWI, and over 300 artefacts.

At an additional cost, visitors can explore other popular exhibitions at Portsmouth Historic Dockyard, including the Mary Rose - the only 16th-century warship on display anywhere in the world, which took 600 trees to build and was in service for 34 years. The Mary Rose exhibition shows the favourite warship of Henry VIII, which sank in 1545, just off the coast of Portsmouth. And now visitors can see for themselves the artefacts raised from the seabed 470 years later.

As well as countless historical stories of the British Royal Navy, Portsmouth Historic Dockyard also has various eating establishments, picnic areas, and shopping outlets, where you can purchase a number of mementos.

• In 1495 the first dry dock was built close to where HMS Victory now sits, following the orders of Henry VII.

• In 1509, the Mary Rose was built at the Portsmouth Dockyard.

• Portsmouth Historic Dockyard is next to the Portsmouth’s Naval Dockyard, home to 60% of the Royal Navy’s surface fleet of ships.